Discounts are limited to one per customer and may not be combined with any other offer. Discount amount applies to merchandise total only and cannot be applied toward Smart Apps, clearance items, setup or shipping charges, previous orders or invoice payments. HRdirect reserves the right to make substitutions of equal or greater value for gifts.

View as Grid List
Sort by
Display per page 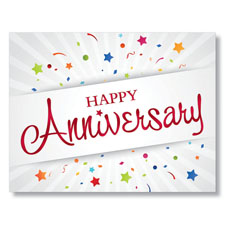 G7092E
Cheers to a Happy Anniversary! Colorful confetti are scattered around modern lettering for a fun yet elegant anniversary wish.
as low as $0.81 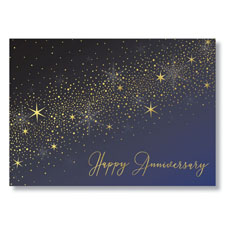 Give Employees a Gold Star Recognition

Thank your employees for their dedication and commitment with employee anniversary cards. Brilliant stars surround the gold "Happy Anniversary" greeting on this midnight blue card. 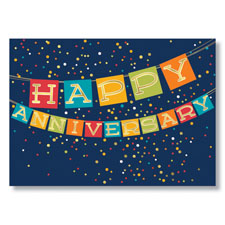 Celebrate Your Employee’s Work Anniversary with a Pop of Color


Recognize your team members with a multi-colored confetti-filled card. 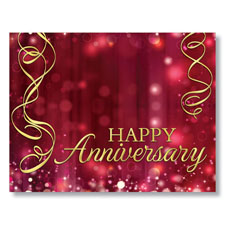 
Honor your team members with happy anniversary greetings. The garnet and gold card adds an elegant touch for a memorable occasion. 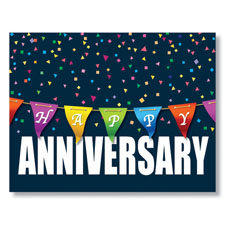 Turn Each Employee Anniversary into a Special Event


Observe each employee’s company anniversary with some upbeat recognition. This cheerful design is a great way to tell your team you appreciate their efforts and keep them motivated.

Give Every Employee Anniversary a Little Extra Impact 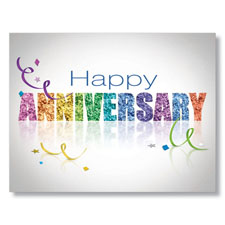 Wish Each Employee a Happy Work Anniversary in Style


Make it easy to show your team you care with these jovial employee anniversary cards. The glittery look of the lettering adds pop and reminds each recipient you appreciate her or him. 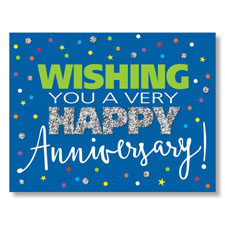 
Give your employees corporate anniversary cards with less “corporate” and more “anniversary.” A vivid design filled with glittery goodness is a fun way to show your appreciation. 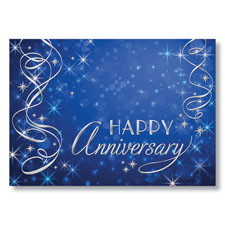 
Make your team members feel valued with these attractive happy anniversary greetings. The glimmering blue field of stars looks even more like a celebration with the embossed silver metallic foil. These company anniversary cards make the occasion extra memorable. 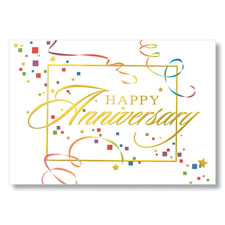 Celebrate a Special Milestone with this Employee Anniversary Card.


Bright rainbow streamers and multicolor confetti scatter the front of the matte white cardstock. Stars in select sizes and a simple lined border detail the card, both embossed and coated with gold foil. "HAPPY" is printed in a block serif font above "Anniversary" printed in elegant script


Thank employees for their hard work with a whimsical gold and blue star-covered card to celebrate their anniversary. 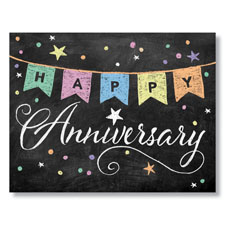 Not All Corporate Anniversary Cards Are the Same


These fun business anniversary cards are a great solution for marking a special day. The playful, artistic look says something important without being formal or stuffy. 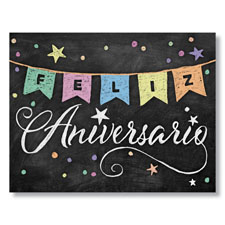 These Employee Anniversary Cards Make Sure Nobody’s Left Out


With these work anniversary cards, you can offer congratulations to your team members who speak Spanish. The quirky design helps show you care and the Spanish messages let the recipient feel like a valuable part of the team.


Tasteful and timeless, Classic Happy Anniversary Cards are a perfect way to commemorate an employment anniversary. This refined design will serve you for years to come. 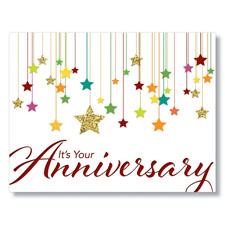 
Thank your employees for their dedication with employee anniversary cards. It features multiple stars, including sparkling gold stars, suspended by various colors above the message “It’s Your Anniversary.” 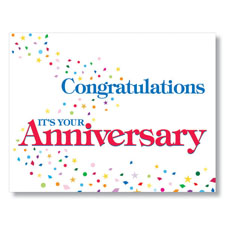 
Celebrate a professional milestone with this employee anniversary card. "Congratulations It's Your Anniversary" is printed on the front featuring a vibrant 4-color design and spray of rainbow-colored confetti. 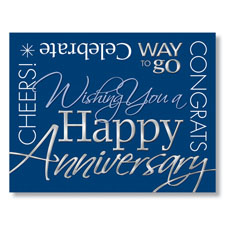 Tap Into the Power of Appreciation


A little thoughtfulness goes a long way with the Contemporary Anniversary Card. This festive design lets you show support for employees by celebrating their work anniversaries. 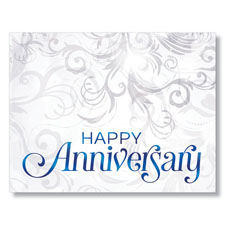 
Honor your team members with happy anniversary greetings. The Sapphire and Silver adds an elegant touch for a memorable occasion. 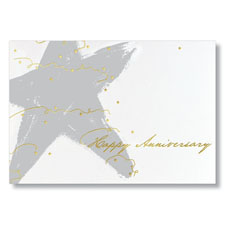 
"Happy Anniversary" in sophisticated script is deeply embossed in the white textured cardstock and covered in gold foil. A gleaming silver star comprises the front of the card, stylized with brush strokes. Gold foil streamers and star confetti scatter the card.


Brilliant gold foil patterned balloons float above the greeting on this vibrant Happy Anniversary card. Simple and classy, this card is sure to make a lasting impression on all who receive it. 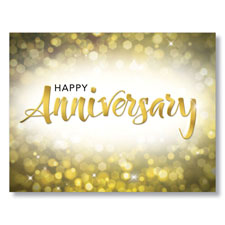 A Touch of Gold for an Employee Anniversary


Recognize each employee’s commitment with work anniversary cards. “Happy” is printed in black lettering with “Anniversary” printed in a gold script with a white halo surrounded by a sparkly gold background.


Wish your most dedicated employees a “Happy Anniversary” with this simple, but stylish, business anniversary card. It features a striking, four-color design with a cover message in a dynamic font and punctuated by a contemporary, gold star. 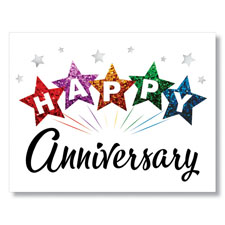 A Joyful Card for a Star Employee’s Anniversary


Bursting into the scene with glittery, rainbow-hued stars, this anniversary card is sure to brighten an employee’s day. It’s a cheerful card to share your enthusiastic congratulations for a year of dedicated service. 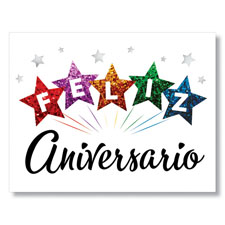 A Joyful Card for a Star Employee’s Anniversary


Bursting into the scene with glittery, rainbow-hued stars, this anniversary card is sure to brighten an employee’s day. It’s a cheerful card to share your enthusiastic congratulations for a year of dedicated service.

Go For Graphic with An Eye-Catching Anniversary Card


With its clean, bold design of perpendicular purple and blue lines, this birthday card is striking in its simplicity. Couple the graphic with a strong message of thanks (and encouragement,) and you have the perfect card to recognize an employee anniversary. 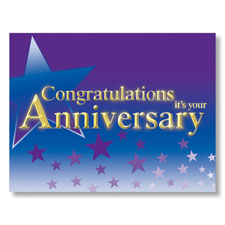 
Thank your employees for all their hard work this year with this lively employee anniversary card. It features a dazzling, four-color design with a spray of shaded stars against an intense purple background. "Congratulations it's your Anniversary" is printed across the front of the card in a radiating golden yellow ink. A large star in a gradient midnight blue ink is outlined behind the inscription. Smaller stars in coordinating tones of blue dance along the bottom of the card. The artwork is printed against a gradient midnight blue background.

This Calls for a Celebration


Wish them a Happy Anniversary with this soft silver background card featuring silver patterns. This elegant greeting card is sure to be proudly displayed for all to enjoy.


Make your employees feel appreciated on their corporate anniversary. These business anniversary cards will convey your sincerest anniversary greetings.

Sorry this card is out of stock


Bursting with color and pattern, this Starburst Anniversary Card is sure to make anyone’s work anniversary special. It features an energetic, four-color design with a spray of rainbow-hued stars and steamers that “pop” against the white background. "HAPPY ANNIVERSARY" is expressed in thick bubble lettering, a bright blue ink and outlined in white. 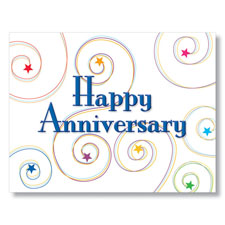 The Stars and Swirls Anniversary Card Shows You Care


Let your employees know they’re important with one simple gesture. These tasteful cards make it easy to recognize an employment anniversary and tell your team you appreciate them.


Fun colors and an exclusive design make this employee anniversary card a one-of-a-kind greeting. It features a lively, four-color design with rings of bright color around the cover message and a spray of streamers and stars.


Make an employee’s day with a celebratory Anniversary card